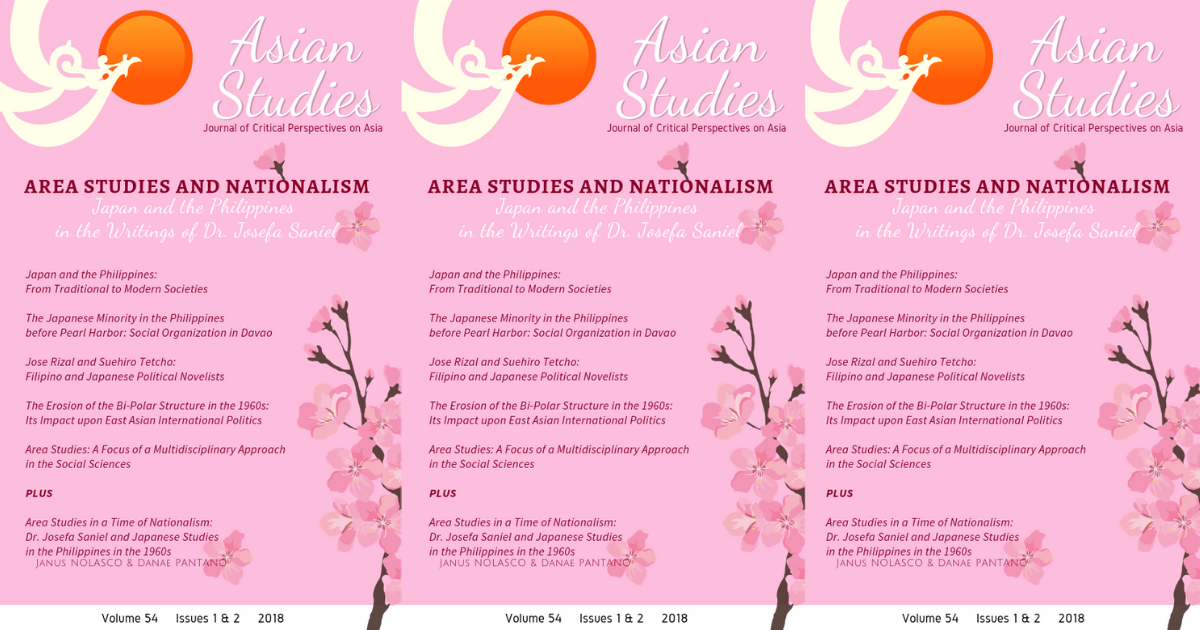 Born in 1925, [Dr. Josefa Saniel] finished her Bachelor of Science in Education at the University of the Philippines (Magna Cum Laude) in 1949; obtained her M.A. in History at the University of Chicago in 1953 under a Fulbright Smith-Mundt grant (Soriano and Retizos 1981, 330); and took her PhD in Far Eastern Studies at the University of Michigan in 1961. She was supervised by John W. Hall,1 a student of Edwin O. Reischauer and an authority on premodern Japan (Scott 1997). Just as Professor Hall played an influential role in the development of Japanese Studies in the United States. so did Dr. Saniel in the case of the Philippines. She helped establish area studies as a field of study, and develop Japanese Studies as a graduate degree program, in the University of the Philippines. She also edited a collection of papers (Saniel 1967) presented at the “inaugural meeting of the Association for Asian Studies on the Pacific Coast” in San Francisco from 16 to 19 June 1967. Later on, she produced four different surveys of the state of Japanese Studies in the Philippines (1969, 1984, 1989b, 1992), and undertook an overview of Asian Studies and area studies programs in the United States and Canada (1989a).

From May to June 1955, she was part of a delegation that travelled across Southeast Asia to “study at close range the histories of the Southeast Asian peoples” (quoted in Saniel 1955, 2). In November, the Board of Regents of the University of the Philippines approved the creation of the Institute of Asian Studies (IAS), which would later be known as the Asian Center (Santamaria 2017). The idea for establishing such an institute originated from President Ramon Magsaysay’s letter to UP president, Vidal Tan (Santamaria 2017). In turn, the entire initiative belonged to the general foreign policy thrust of the Philippine government. In 1954, President Magsaysay set up the Asia Good Neighbor Commission amidst the geopolitical competition between the United States and the Soviet Union. The Commission was also “a basis of cooperation…between the Philippines and her neighbors” (Saniel 1955, 1). The Southeast Asian Treaty Organization (SEATO) had been established in the same year, and the Bandung Conference would take place in 1955. As in the United States, area studies in the Philippines was born in the exigencies of the Cold War.

As part of the the university’s thrust to develop the IAS, Ms. Saniel took up her PhD in the United States, specializing on Japan, while a colleague focused on China. She was part of a generation of Filipinos—Cesar Adib Majul, Felipe Jocano, Onofre D. Corpuz, among many others (Rafael 2015, 3)—who pursued graduate studies in the U.S.

Back home, she wrote on modern Japanese history, with particular emphasis on the second half of the 19th century; Philippines-Japan relations; Japanese culture, society, and literature, and Japan’s foreign policy in Southeast Asia. Some of her publications were translated into Japanese and published in Japan.2 She is the author of Okuma Shigenobu and the Philippine 1898 Problem (1965b), and the pioneering, Japan and the Philippines, 1868-1898 (1963b), which is based on her PhD dissertation. Published by the University of the Philippines Press, it is her most-cited work. It was reprinted in 1969 and republished in New York by Russell Publishers Press in 1973 (UP EAA 2010, 100).

The greatest achievement of the author’s research is the opening of a new field so far neglected by Western scholars…. One must praise Dr. Saniel for what must have been the extremely difficult research involved in detailing the activities of the shishi, Japanese military officers and civilians who were sent to the Philippines despite the official hands-off policy of Japan. (Flood 1965)

She began her academic career as a history instructor at the University of the Philippines in the 1950s. In 1963, she was Assistant Professor at the Department of History and later served as Associate Professor in East Asian Studies and Program Coordinator of the Institute of Asian Studies. By this time, she had “spent a year researching at the Archives of the Japanese Ministry of Foreign Affairs.”3 In 1967, she was “the first Asian Visiting Leverhulme fellow of the School of Political Science, University of New South Wales, Kensington” in Australia (Soriano and Retizos 1981, 330).

Two years later, she was a consultant for Japan Affairs, Office of the Secretary, Department of Foreign Affairs (331). In June 1971, she visited Japan, together with Acting Executive Secretary Roberto V. Reyes and Dr. Antonio Arizabal, Director of the Board of Investments. This academe-government link partly explains the sociopolitical thrust of her scholarship.
She served as the “Secretary, Institute of Asian Studies (later known as the UP Asian Center), 1968–1974; Officer-in-Charge, Institute of Philippine Studies, Philippine Center for Advanced Studies (PCAS), 1974–1975; Dean, Institute of Asian Studies, PCAS, 1974–1979; Officer-in-Charge, Asian Studies Program, July–December 1979; and Dean, Asian Center, 1980–1985” (UP EAA 2010, 100). Dr. Saniel became a full-fledged professor of East Asian Studies in 1973.4 That year, the Philippine Center for Advanced Studies, a think-tank of the Philippine government, absorbed the Asian Center, which remained part of PCAS until 1979. She was “instrumental in bringing into reality the construction of the Asian Center building (later renamed Romulo Hall) and in successfully re-establishing the Asian Center as a college unit of the University of the Philippines upon the abolition of the PCAS…” in 1979 (Santamaria 2015).

Dr. Saniel was a member of various local and international academic organizations, including the International Association of Historians of Asia, Association for Asian Studies, Philippine Historical Association, and the American Academy of Political Sciences, among several others (Soriano and Retizos 1981, 330). Because of her contributions to the field, on 29 May 1986, she was “awarded the Third Class Order of the Precious Crown by His Majesty the Emperor of Japan and the Japanese Government” (Santamaria 2015). She became Professor Emeritus of the Asian Center in 1993. Today, the Asian Center library maintains the Saniel collection, which consists of over 1,773 books (Landa 2018, n.p.) that she donated. Needless to say, many of them are Japan-related.

This biography is excerpted from "Area Studies in a Time of Nationalism: Dr. Josefa Saniel and Japanese Studies in the Philippines in the 1960s" Asian Studies: Journal of Critical Perspectives on Asia 54 (1–2): 2019: 3–25.

1955. Report on a Tour of Southeast Asia from May 13 to June 25, 1955. Quezon City: Institute of Asian Studies, University of the Philippines.

1965. “The Mobilization of Traditional Values in the Modernization of Japan.” In Religion and Progress in Modern Asia, edited by Robert N. Bellah, 124–49. New York: The Free Press.

1971. The Philippines-Japan Treaty of Amity, Commerce and Navigation: An Overview. Quezon City: Asian Center, University of the Philippines.