The Postwar Rise and Decline of the Left in Southeast Asia | A Public Lecture, 7 March 2019 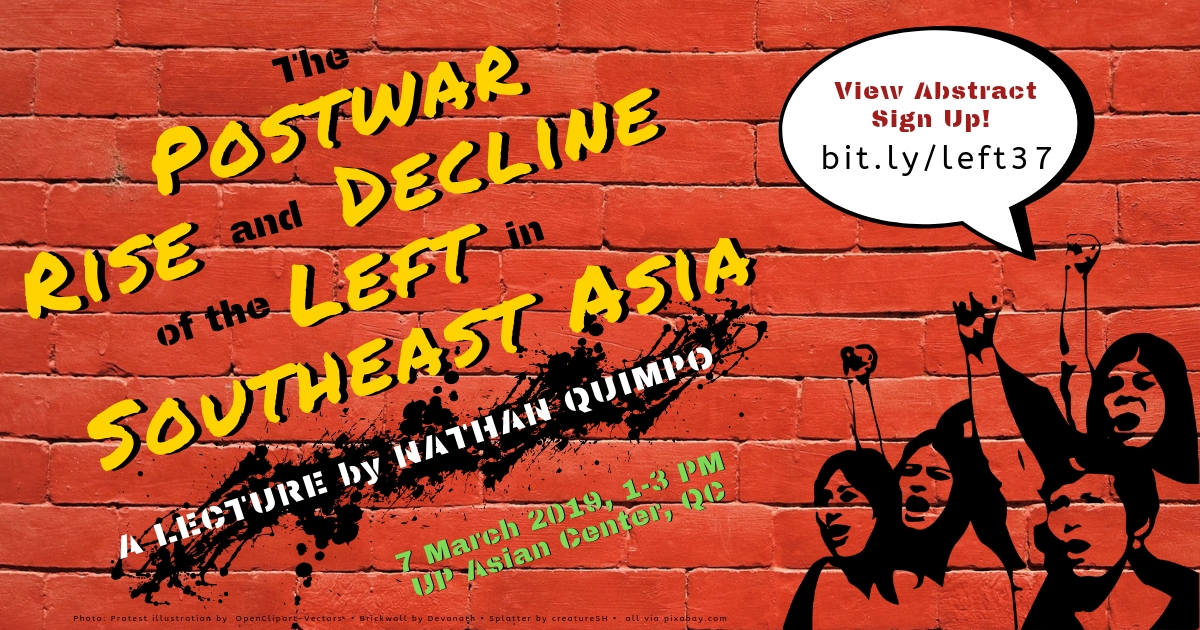 The UP Asian Center will be organizing “The Postwar Rise and Decline of the Left in Southeast Asia,” a public lecture by Nathan Gilbert Quimpo on 7 March 2019, 1 pm–3 pm, UP Asian Center, QC. The lecture is free and open to the public; seating is first-come, first-served, but participants are encouraged to sign up online.

Leftist movements and parties played prominent roles in the politics of Southeast Asian countries before and during World War II and in the early postwar decades. Communists and socialists were in the forefront in the struggles for independence against colonial rule, in the resistance against Japanese occupation, and in postwar revolutionary movements against postcolonial elite rule. Since the 1980s, however, leftist forces have faded and, despite the expansion of political space in varying degrees in Southeast Asian countries in more recent years, the left has not significantly recovered.

Examining the postwar rise and decline of the left in Southeast Asia, Nathan Gilbert Quimpo argues that most of the major revolutionary left groups in Southeast Asia (except in Vietnam and Laos) followed, or were strongly influenced by, Maoist tenets, which proved very much unsuitable to their countries’ conditions. The revolutionary left launched “protracted people’s wars” that all failed to progress beyond guerrilla warfare.  The dogmatism and inflexibility of the revolutionary left forces prevented them from shifting successfully from armed to electoral/parliamentary struggle, and from playing a significant role in popular uprisings in the region from the mid-1980s onwards.

Since the decline of the revolutionary left in the 1980s, Quimpo argues  further, some leftist political forces – mostly social democratic parties and pre-party formations – have emerged and are seeking to challenge the hold on power of entrenched politico-economic elites.  They face great odds, however, as the entrenched elites , apart from resorting to the usual patronage and corruption, have also been building and developing their own models of participation and representation to prevent effective contestation for power by progressives.

For inquiries, please email This email address is being protected from spambots. You need JavaScript enabled to view it.. View vicinity map for directions.

The Asian Center offers M.A. degrees in Asian Studies with four fields of specialization: Northeast Asia, Southeast Asia, South Asia, and West Asia. The Center also has an M.A. program in Philippine Studies that allows students to major in Philippine society and culture, Philippine foreign relations, or Philippine development studies. The Center offers a Ph.D.  program in Philippine Studies in conjunction with the College of Arts and Letters and the College of Social Sciences and Philosophy. Get an overview of these graduate programs. The Asian Center also publishes an open-access, peer-reviewed journal, Asian Studies: Journal of Critical Perspectives on Asia.