The Rohingya Conundrum: Its Significance for International Studies | A Public Lecture, 5 Dec 2017 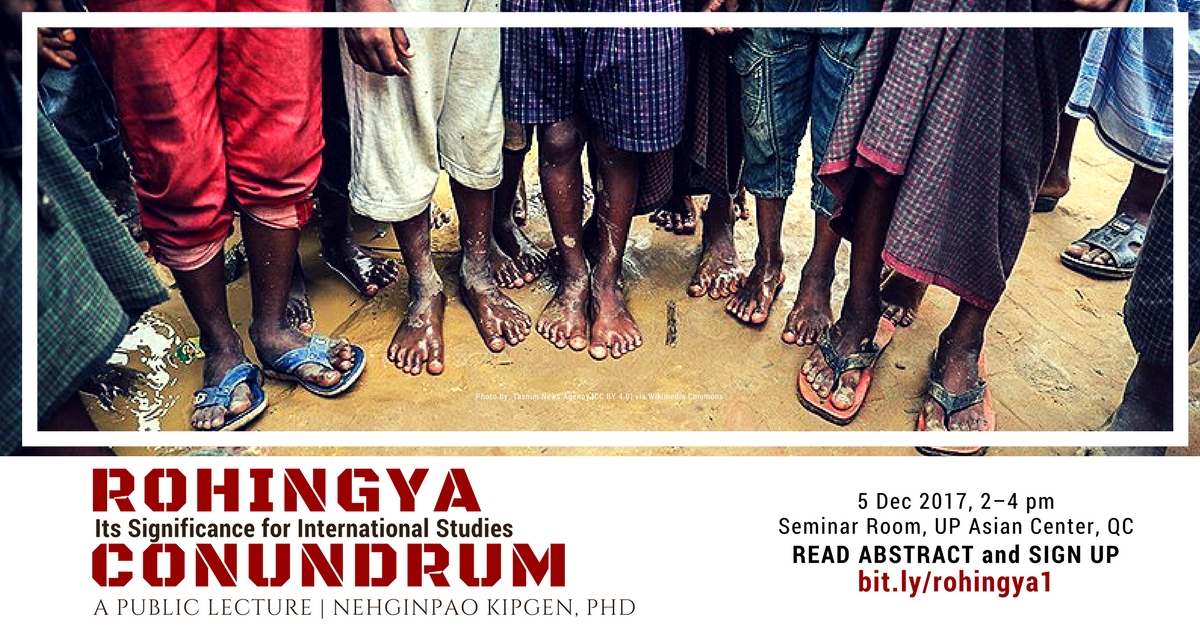 The UP Asian Center will be hosting a public lecture by Dr. Nehginpao Kipgen on The Rohingya Conundrum: Its Significance for International Studies, on 5 December 2017, 2:00 p.m. to 4:00 p.m., Seminar Room, UP Asian Center, Diliman, Quezon City. The lecture is free and open to the public, but seating is first-come, first-served. Participants are encouraged to sign up.

The conflict between Rohingya, a Muslim minority in Rakhine state in western Myanmar (Burma), and the Rakhine Buddhists has been an international concern since 2012 when violence first erupted in recent years. The latest wave of violence started on August 25 when Muslim militants staged coordinated attacks on 30 Myanmar police posts and an army base. The military responded with counterinsurgency operations of its own, which has resulted in the death of over a hundred and the displacement of hundreds of thousands. The August 25th attack occurred just hours after the advisory commission led by former U.N. Secretary-General Kofi Annan released its official report advising the government on long-term solutions for the violence-riven state. The protracted violence is a threat not only to Myanmar’s internal peace and stability but also for the country’s relations with the international community, particularly its immediate neighbor Bangladesh and the Muslim-majority countries in Southeast Asia, such as Malaysia and Indonesia, that have expressed concerns over the Rohingyas’ treatment in the past. The religious component of the conflict could potentially inflame tensions around the region, and even contribute to new terrorist activities. This talk will focus on three fundamental issues: the Rohingya conundrum, possible solutions, and its implications in international studies.

Dr. Nehginpao Kipgen is Assistant Professor and Executive Director of the Centre for Southeast Asian Studies, Jindal School of International Affairs, India. He is a Political Scientist whose concentration are in Comparative Politics and International Relations. Since 2013, Dr. Kipgen has served as a “country expert” on Myanmar for Varieties of Democracy (V-Dem), a collaborative academic research project of the Department of Political Science, University of Gothenburg (Sweden), and the Kellogg Institute, University of Notre Dame (USA). He is the author of 3 books and 16 peer-reviewed academic articles. He has also published over 160 articles in various leading international newspapers and magazines in five continents - Asia, Africa, Australia, Europe, and North America – including but not limited to the Washington Post, Foreign Policy Journal, Nikkei Asian Review, The Straits Times, Sydney Morning Herald, New Zealand Herald, Jerusalem Post, The Hindu, China Post, Japan Times, Korea Times, South China Morning Post, The National, Bangkok Post, Jakarta Post, Manila Times, and Brunei Times.

Vehicles entering the UP Asian Center (GT-Toyota Asian Cultural Center) grounds can only do so via the gate on Magsaysay Avenue that is near a UP guardhouse, a few meters away from Katipunan Avenue, and across Maynilad. A small gate for pedestrians on Guerrero St. lies across the College of Law parking lot and a few meters away from a waiting shed, where the Ikot jeepney, and jeepneys from Philcoa and SM North pass by. VIEW VICINITY MAP and GOOGLE STREET VIEW

If you are planning to come with/as a big group (a class or delegation), please let us know the number of participants at This email address is being protected from spambots. You need JavaScript enabled to view it.. It would also be best if their names could be registered online or if you could send us a list of their names.