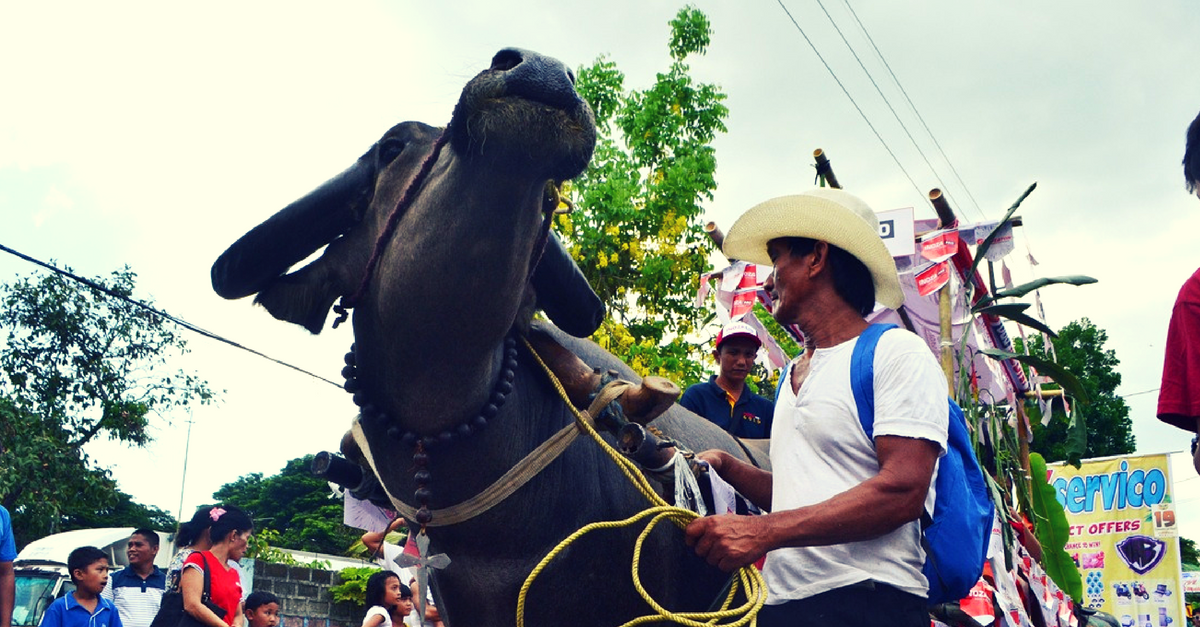 Parade in the Carabao Festival, 2015. Photo by KenyoTravel.

A chapter on the carabao festival, “Performing Faith, Celebrating Plenty, Conserving Tradition: the Case of the Carabao Festival of Pulilan, Bulacan, The Philippines” by Dr. Reuben Ramas Cañete, Professor at the UP Asian Center, has been published in The Folk Performing Arts in ASEAN, edited by Narupon Duangwises and Lowell D. Skar and published in 2016 by the Princess Maha Chakri Sirindhorn Anthropology Centre, Bangkok, Thailand.

In the book chapter, Professor Reuben Ramas Cañete “looks at the Pulilan Carabao Festival as a manifestation of folk performance in constructing and maintaining the identities of its participants as farmers and Catholic devotees; while simultaneously problematizing the representation of folk performance through the display and execution of performance and “staging” objects, as enunciated by practitioners and local cultural preservationists, all of which occurs under the glare of global tourism” (117).

The chapter aims to situate the carabao kneeling and knee-walking tradition within wider socio-religious, geographical and historical contexts.  “Dedicated to the Spanish saint San Isidro Labrador, the Carabao Festival is a harvest festival that focuses on the thanksgiving of farmers for a year’s agricultural produce. Paraded through the center of the town, the farmers and their carabaos celebrate the fertility of the land via various buntings and decor, and perform religious rituals through the rehearsed act of genuflecting in front of the church” (117). The ethnographic study conducted by Professor Canete traces this practice in “the Province of Bulacan, in the central portion of Luzon island” (118), which dates “as far back as the middle of the 19th century CE” (120).

More recently, the use of the Carabao Festival by the Department of Tourism and the advent of modern technological innovation have posed a number of issues, the most prominent of which are “the transformation of focus from the saint’s feast day (San Isidro) to that of the carabao as festival animal detaches the religious significance of the event [...] that now threatens to compete with the sanctity of the feast day” (124); “the need to contrast the presence of the carabao as “featured performer” of the festival with other tools of agriculture [...] since the general rubric of the parade’s ritualistic function is to “ask for abundant harvests” (125); and “the need to culturally preserve both the form and function of the carabao as traditional beast of burden/featured festival animal, along with the associated material culture (the use of the kariton, punihan as decoration material, and so on) on the farm, despite modernization in the countryside brought about by the very progress that the farmers themselves wish for in their devotional rituals” (125).

In the end, the contrast of secular vs. religious and traditional vs. modern reconcile as “the singular uniqueness of this folk performance practice has meant that both the state and private cultural preservationists have found it in their common interest to preserve the carabao kneeling/knee-walking practice as a cultural “identitarian” signature with both political and economic implications for the municipality of Pulilan” (126).

Professor Cañete has a Ph.D. in Philippine Studies from the University of the Philippines Diliman and specializes on political aesthetics, masculinity studies, and the preservation and promotion of local artistic traditions in Cebu and Bulacan.  At present, he is Assistant to the Dean for Cultural Affairs, curator of the Asian Center Museum, and is part of the Executive Council of the National Committee on Visual Arts, National Commission for Culture and the Arts. Visit his faculty profile.

The Folk Performing Arts in ASEAN may be purchased online at the Princess Maha Chakri Sirindhorn Anthropology Centre.