Read Summary: “The Domestic Mediations of China’s Influence in the Philippines” | A Book Chapter by Professor Baviera (2) 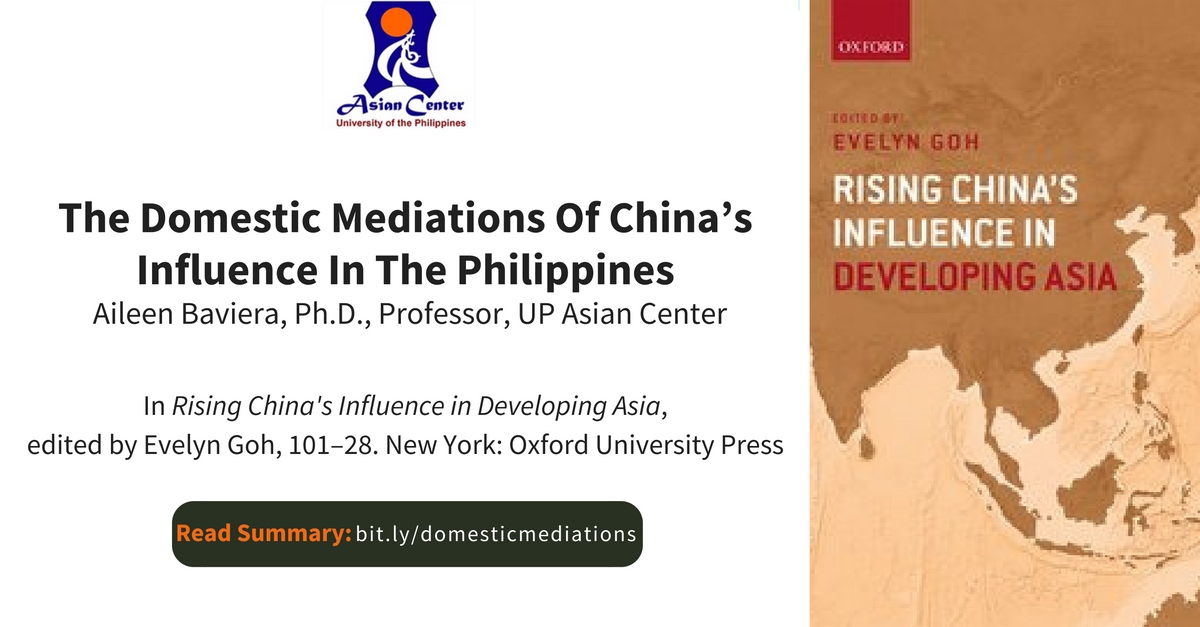 The Domestic Mediations of China’s Influence in the Philippines” by Professor Aileen S. P. Baviera of the UP Asian Center was published in Rising China's Influence in Developing Asia, edited by Evelyn Goh and published in 2016 by Oxford University Press.

In the book chapter, Professor Baviera asks whether “China’s material power—underpinned by growing military and economic resources—[has] translated into greater influence in the Philippines, particularly over political and economic policy decisions of the Philippine government” (102).

To provide an answer, she looks at “case studies, which process-trace major Philippine policy decisions in which China played an important role” (103).

Based on these case studies, Dr. Baviera concludes that "how China’s power translates into influence (defined as changing the outcomes to favour one’s interests) depends less on the amount of power than it does on other factors including its successful cultivation of allies among members of the Philippine political elite and whether or not there are countervailing sources of influence at the systemic level….” (127).

Dr. Baviera finds that “Philippine foreign policy decisions ... were responsive to persuasion and inducements by China when elite networks prevailed...but political actors and interest groups not in favor of Chinese interests can quickly block China’s channels of influence. " (C)oercion and intimidation played a more important role when China perceived high strategic stakes with the involvement of the U.S. But in each of the cases, "the Philippines has not been so helpless in the face of China’s superior resources, and Chinese influence is not as efficacious as might be deduced from the scale of power asymmetry alone” (127–28).

Dr. Aileen SP. Baviera is Professor at the Asian Center, University of the Philippines Diliman. She specializes on and writes about contemporary China studies, China-Southeast Asia relations, Asia-Pacific security, territorial and maritime disputes, and regional integration. The editor in chief of the journal, "Asian Politics & Policy," she is the author of many academic publications and completed her Ph.D. in Political Science at the University of the Philippines Diliman. VIEW FULL PROFILE.