“Transport and Mobility: The Filipino via crucis” | A Book Chapter by Rolando Talampas 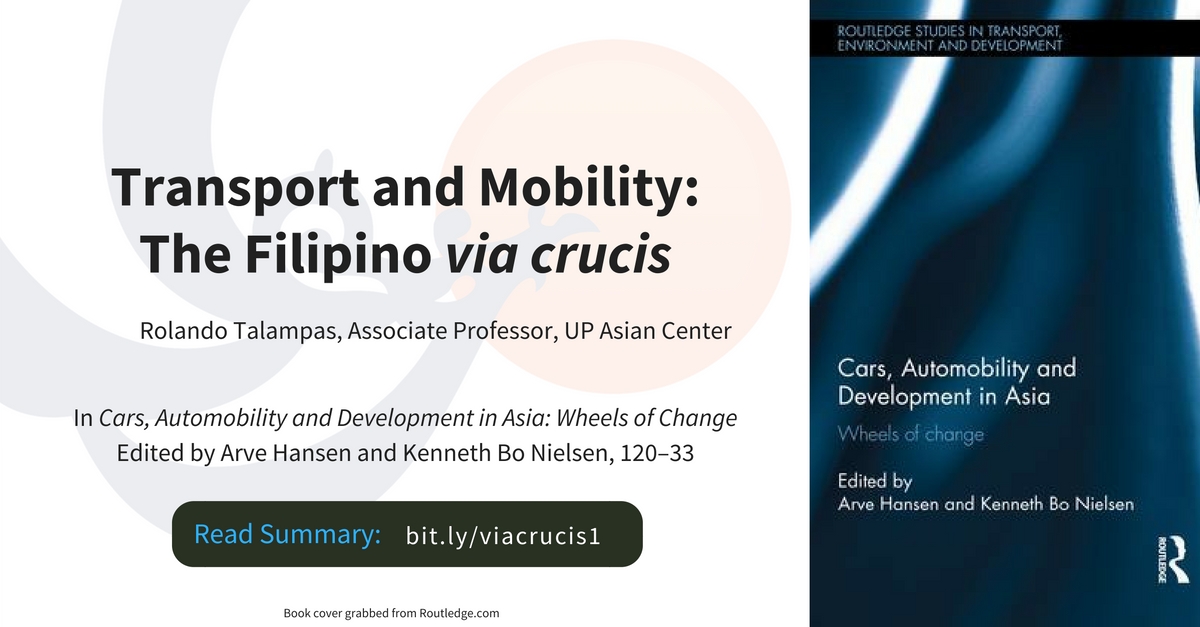 A chapter on Philippine transportation, “Transport and Mobility: The Filipino via crucis” by Rolando Talampas, Associate Professor at the UP Asian Center, has been published in Cars, Automobility and Development in Asia: Wheels of Change, edited by Arve Hansen and Kenneth Bo Nielsen, and published by Routledge.

Below is a summary of the chapter, where he traces the major changes in Philippine transportation since the colonial period, looking at infrastructure and vehicles utilized, and identifying the social significance and implications of these shifts.

The chapter starts with a historical narration of the advent of automobiles to the Philippines in early 1900s, with brief discussions on the Manila-Dagupan rail, which was inaugurated in 1892.  However, the American colonizers, and the Spanish before them, left behind an underdeveloped transportation infrastructure, especially in rural areas. Since then, the roads and public transportation infrastructure have been inadequate and incapable of keeping up with the increase of vehicles on the road. It is estimated that only 20% of the vehicles in Metro Manila are publicly owned.

US colonial rule privileged the automobile (over the electricity-run tranvia) that saw increasing presence in Manila with the growth of the middle class in pre-war and post-war Philippines.   Status and sense of achievement in turn made the car, especially vintage and late model luxury ones, the distinct symbol of class and privilege.
The Americans left another legacy behind namely the jeepney, which was locally produced after the American military jeeps and repurposed as privately-owned public transportation mode. The heightened flow of remittances during the 1970s and 80s helped fund the purchase of many more jeepneys, which grew popular and were anointed as “king of the road”. However, the “king” was not to go unchallenged for long. The bulky vehicle that broke down frequently is now being slowly phased out in favor of more efficient and comfortable utility vehicles (UVs).

In addition to the jeepney, another recognizable national mode of transport is the tricycle, which evolved from the Japanese-introduced motorcycle. This mode has endured for a variety of reasons, including affordability, low operation cost and profitability. However, the ubiquity and accessibility of the tricycle has been blamed for a number of problems including congestion, pollution, poor health and living conditions for drivers, and persistent correlation with lower-class lifestyle.

The desire to evade these problems and rise up the social ladder combined with affordability of private non-commercial vehicles have helped the sale of private cars to soar to unprecedented levels over the past few years. The author argues that the prevalence of private car ownership meets not just practical needs of mobility but also has social connotations of status and success adding to the allure of car purchase.

Along with rapid economic growth the Philippines has been witnessing,  this surge in car sales has contributed to an-ever deteriorating traffic situation especially among Metro Manila’s 16 cities. In this sense, the gridlock transcends the roads of Metro Manila and stretches to the futile attempts of resolving this problem.

Rolando Talampas is Associate Professor and current College Secretary of the Asian Center, University of the Philippines Diliman. He specializes in Southeast and West Asian Studies, Philippine Studies, and Development Studies. Professor Talampas also handles several graduate courses at the UP Asian Center, including Research Methods in Asian/Philippine Studies and Seminar on Southeast Asia. He handles a few courses as faculty affiliate of the UP Open University-MA ASEAN Studies Program. View his faculty profile here.