“The Philippines and the South China Sea Dispute: Security Interests and Perspectives” by Dr. Aileen Baviera 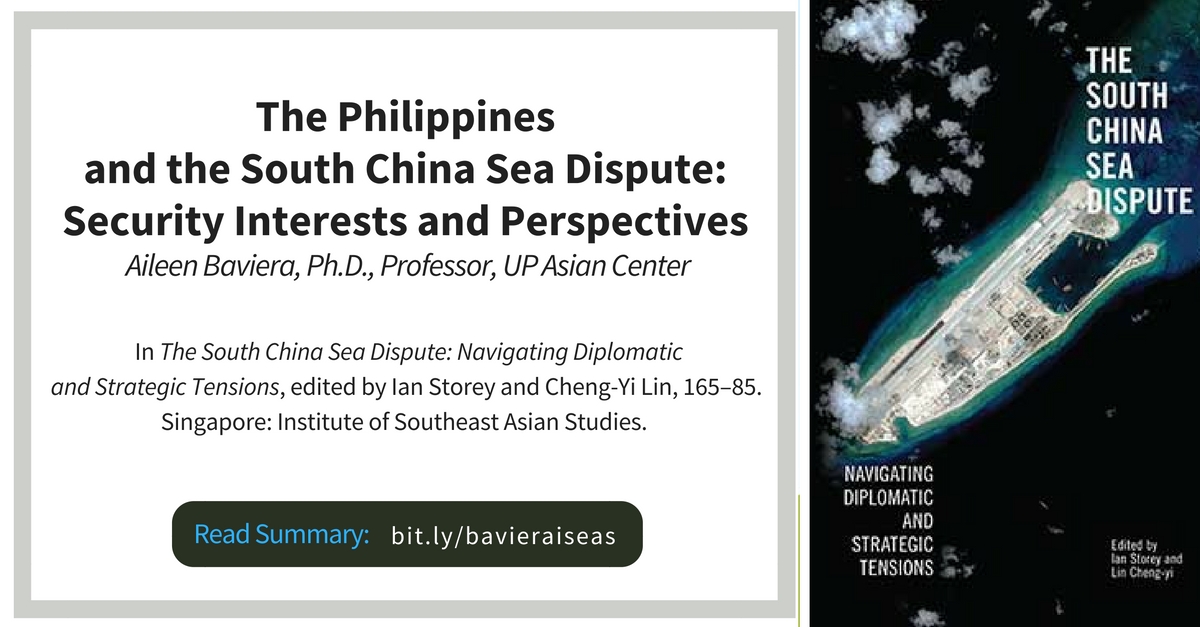 The book “explores the central drivers of the dispute and examines the positions and policies of the main actors, including China, Taiwan, the Southeast Asian claimants, America and Japan” and “provides readers with the key to understanding how this most complex and contentious dispute is shaping the regional security environment.”

In her article, "The Philippines and the South China Sea Dispute: Security Interests and Perspectives," Professor Baviera offers “a brief background on Philippine claims in the South China Sea” and examines “recent developments pertaining to the disputes; the conditions that explain the worsening security environment for the Philippines and how they impact the country’s political and security interests” (163).

Dr. Baviera writes that “an unfortunate convergence of interactive conditions thus appeared to undermine regional stability” in 2007-2008, including “renewed interest in exploiting energy resources in the South China Sea” because of instability in Western Asia; rising nationalism; consolidation of “legal claims” by coastal states; the breakdown of “cooperative initiatives such as the JMSU and the earlier code of conduct discussions with China;” the United States’ pivot in Asia; and China’s “peaceful rise” and “peaceful development” (166).

Philippine foreign policy, argues Dr. Baviera, have been affected not just by the changing security landscape, but also by U.S-China competition, “evolving threat perceptions and conceptions of national interest” and domestic political concerns (171).

The South China Sea Dispute: Navigating Diplomatic and Strategic Tensions may be purchased online at the ISEAS website; individual chapters, including that of Professor Baviera, may be bought separately. The introduction by the editors is available as a FREE PDF on the ISEAS website.