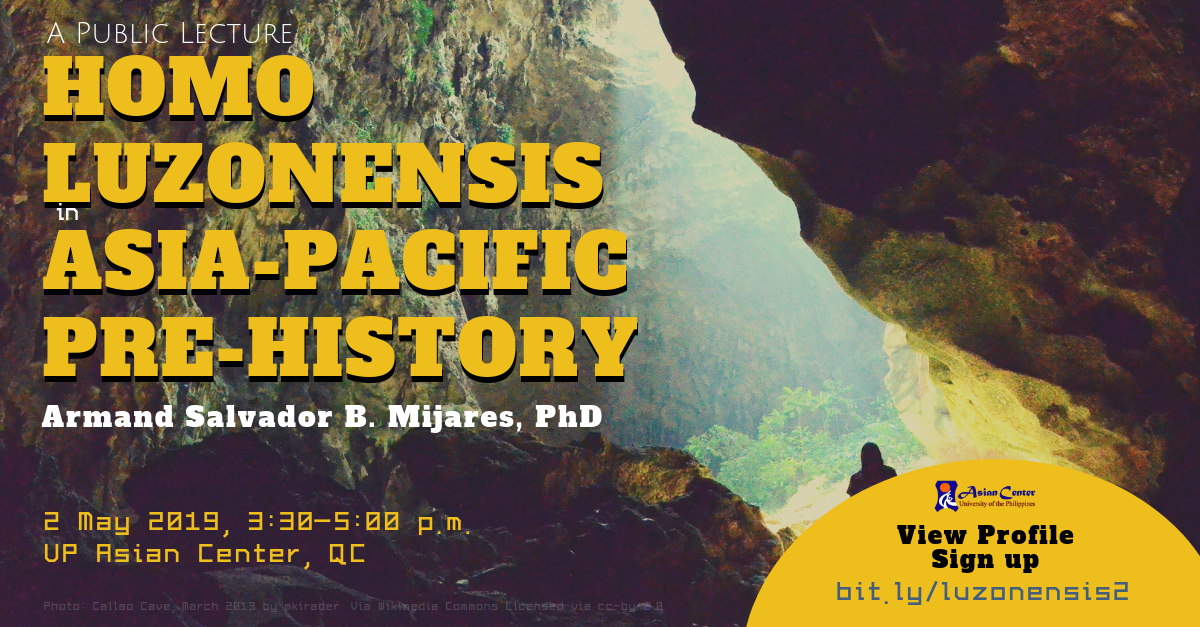 The UP Asian Center, and the UP Alpha Sigma Fraternity Alumni Association, will be holding a public lecture by Dr. Armand Salvador B. Mijares, Homo Luzonensis in Asia-Pacific Pre-History, on 2 May 2019, 3:30 p.m. to 5:00 pm, Asian Center, University of the Philippines Diliman. The lecture is free and open to the public, but seating is first-come, first-served. Participants are encouraged to sign up:

homo luzonensis is the recently discovered human species found in Callao Cave in Cagayan Province, Philippines. Dated between 50,000 to 67,000 years old, the species ‘suggests that several different human species once co-existed across Southeast Asia.’ (Fleming 2019). Its discovery comes 15 years after that of Homo floresiensis, which was named after Flores island in Indonesia. The scientific report in the cover article "Out of Asia" in an April 2019 issue of the very prestigious Nature Magazine puts the spotlight on Filipino contribution to world archaeological knowledge.  Is there a possible connection with evidence of human evolution in the Asia-Pacific?

Dr. Armand Mijares is director of the project that led to the discovery of, and subsequent publication on, Homo luzonensis in Nature. He obtained his PhD in Archaeology and Paleoanthropology from the Australian National University. According to his profile from UP’s Archaeological Studies Program, his research “focuses on understanding early human migration in Island Southeast Asia. I am also interested in in reconstructing hunter-gatherer subsistence strategy during the Late Pleistocene and Early Holocene period.” View his full profile.