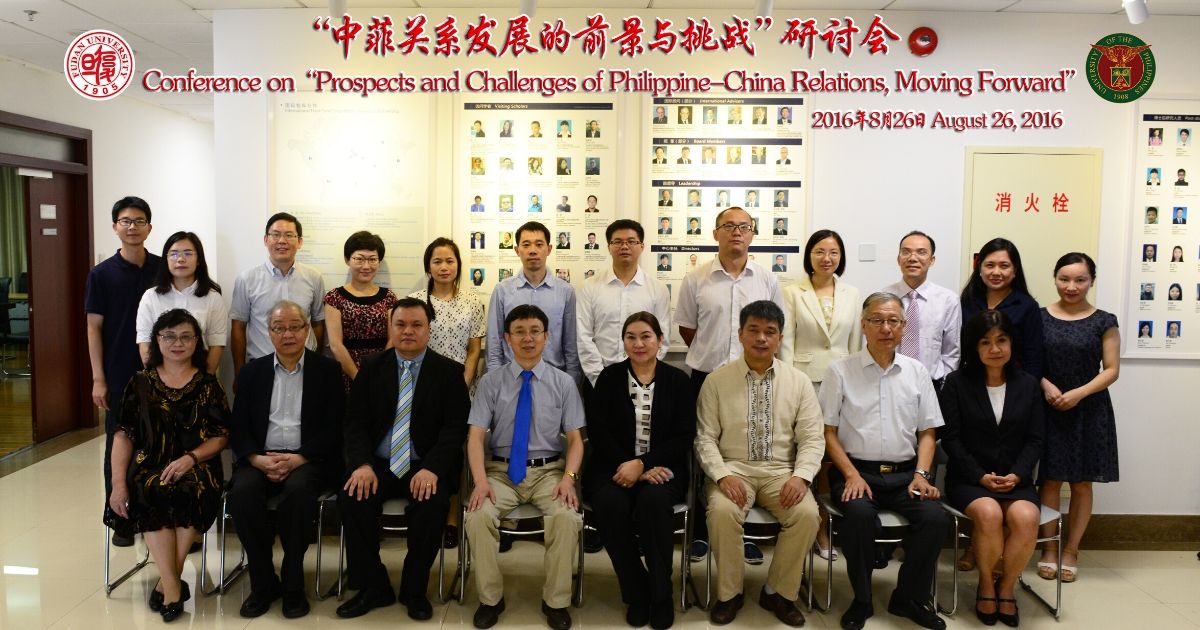 On the afternoon of 21 March 2020, I received an email from Aaron Jed Rabena, associate fellow of Asia Pacific Pathways to Progress Foundation (APPFI) of the Philippines, and learned that Professor Aileen S.P. Baviera passed away in the early morning that day at the age of 60. The shocking news caused a deep grief to me and I could not refrain from recalling the details of memory about Professor Baviera. I was deeply grieved at the shocking news and could not help reminiscing about Professor Baviera.

Dr. Aileen S.P. Baviera was Professor and former Dean of the UP Asian Center, President of the APPFI, editor in chief of Asian Politics & Policy. Professor Baviera had been dedicated to contemporary China studies and China-Southeast Asia relations studies for 40 years. In her 40-year academic career, she was not only a distinguished China watcher, but also a government analyst, an author, an editor, a policy adviser, a public speaker on international relations, an advocate of people’s diplomacy, and a keen observer of global affairs. Her death is a great loss to the Chinese research community in the Philippines and a great loss in the field of academic exchanges between China and the Philippines.

The first time I had met professor Baviera was on April 5, 2010, when I was a Post-Doctoral Fellow at Fudan University’s School of International Relations and Public Affairs. Professor Baviera was invited to participate in the International Conference on “Debating Multilateralism: Exploring Consensus in Asian Perspectives,” co-organized by Institute of International Studies at Fudan University (IIS Fudan) and Association of ASIA Scholars (AAS). Entrusted by Professor Zhang Guihong, the host of the conference, I went to Fudan Qingyun Hotel that morning to bring Professor Baviera to the venue. Her leg was injured, so I called a taxi in advance. We had a very pleasant chat along the way and she was so agreeable. She knew China very well and had been to many places in China, including China’s border areas such as Xinjiang, Inner Mongolia, and Heilongjiang.

Our second meeting was at the 36th Lecture of Fudan University Forum for China’s Neighboring Diplomacy Studies on 29 June 2016. Professor Baviera talked about the arbitration in SCS conflict management from the Philippine’s perspective and I chaired her lecture. She suggested China and the Philippines could make joint development and joint conservation possible by setting aside sovereignty disputes. Her suggestion proved farsighted under the discussion of the two countries during Duterte Administration. We also discussed whether the ruling of the South China Sea Arbitration would affect the Sino-Philippine bilateral academic seminar to be held at Fudan one month later. We both agreed that no matter how the situation would evolve in one month, the seminar would be held as planned.

On 12 July 2016, the ruling of the South China Sea Arbitration was released. The situation in the South China Sea at that time was highly tense, and Sino-Philippine relations fell into a relatively difficult and uncertain state. On 13 July 2016, I sent an email to the UP Asian Center to reiterate our position that we would still jointly hold the Sino-Philippine bilateral academic seminar at Fudan as planned. And I received the confirmation letter right on the same day.

On 26 August 2016, the seminar “Prospects and Challenges of Philippine-China Relations, Moving Forward” was held jointly by Center for China’s Relations with Neighboring Countries of Fudan University (CCRNC-Fudan) and the UP Asian Center. Professor Baviera attended this seminar as a member of the UP and this was my third meeting with her. She made a presentation entitled “Managing Post-arbitration Political Security Challenges through Dialogue and Confidence Building.” She pointed out that both sides shall follow fundamental diplomatic principlessuch as mutual respect, equality and common benefit despite the disputes between the two countries, thus creating a good atmosphere for Sino-Philippine diplomatic relations. She also proposed that the two countries ought to enhance economic, commercial and people-to-people exchanges, and rebuild military-to-military relations.

(Group Photo taken at the Seminar of “Prospects and Challenges of Philippine-China Relations, Moving Forward” with Professor Baviera sitting 5th on the left side in the front row)

On the evening of August 26, CCRNC-Fudan hosted a dinner party for scholars that attended this seminar, and prepared a surprise for Professor Baviera. Halfway through the dinner party, the lights in the restaurant suddenly dimmed. As the music “wish you a happy birthday” was played, a birthday cake was brought to Professor Baviera.  She enjoyed a special birthday that night.

It is noteworthy that Mr. Chito Sta. Romana also attended this seminar. As Lecturer at the UP Asian Center, he gave a report entitled “Current State and Prospects of Philippines-China Relations.” On 28 September 2016, one month after the seminar, Mr. Romana was named by Philippine President Duterte as the Ambassador to China.

The last contact I had with Professor Baviera was on 31 January 2020. She wrote to me that she would still be busy in 2020 and she had a lot of teaching and management work to do.  No one expected the grieving news regarding her just one month later.

Professor Baviera offered great help to the program, “Fudan Postgraduate Visiting and Studying Activities in Neighboring Countries” conducted by CCRNC-Fudan. The program was launched in July 2017, and aims to train outstanding talents who are familiar with the neighboring countries for China. From January to February 2020, Dong Yi, a master student I supervised, conducted a survey in the Philippines on China-Philippine joint development in the South China Sea. Professor Baviera wrote an invitation letter for Dong Yi in the name of the President of APPFI and introduced other scholars to her, which greatly facilitated her research.

On 20 August 2019, Prof. Baviera wrote a short essay reflecting on 40 years of studying China, which was published by Tulay. She wrote, “let me end on a positive note to say thank you, China, for having made my life thus far interesting.” In this essay, she gave three unsolicited advice to Filipino younger China watchers, which will be always remembered by young scholars in both the Philippines and China.

Second, she suggested young Filipino scholars should recognize the complexity and multiple facets of China. The Chinese society is both old and young, in which 1.4 billion people are “thinking, breathing, living.” “Simplistic thinking” is meaningless. Her suggestion is also inspiring for Chinese young scholars to conduct research on the Philippines. As a young Chinese scholar of international relations, I noticed an embarrassing fact in the Chinese academic circle, which is the amount of young Chinese scholars studying the Philippines is inadequate to meet the need for the quick development of China-Philippines relations.

Third, she suggested young Filipino scholars should commit to the Filipino people. She wrote, “if one (Filipino) has to take a side; one must take the side of the Filipino people.” Her words also give inspiration to Chinese young scholars. Being a Chinese young scholar on international relations, I will be always committed to the Chinese people. Considering the bilateral relations between the two countries, she indicated that both the Philippines and China should pursue independent foreign policy, which would be conducive to forming long-lasting friendship and gaining respect from other countries.

As a friend of Professor Baviera, I will always remember her great achievements of studying China for 40 years; and I will always appreciate her endless efforts on Philippines-China academic exchanges. The best way to remember Professor Baviera, for young scholars of Filipino and Chinese, is to promote mutual understanding and friendship between the peoples of the two countries.

The Asian Center offers M.A. degrees in Asian Studies with four fields of specialization: Northeast Asia, Southeast Asia, South Asia, and West Asia. The Center also has an M.A. program in Philippine Studies that allows students to major in Philippine society and culture, Philippine foreign relations, or Philippine development studies. The Center offers a Ph.D. program in Philippine Studies in conjunction with the College of Arts and Letters and the College of Social Sciences and Philosophy. For an overview of these graduate programs, click here. The Asian Center also publishes Asian Studies: Journal of Critical Perspectives on Asia, the latest issue of which can be downloaded at the journal's website.