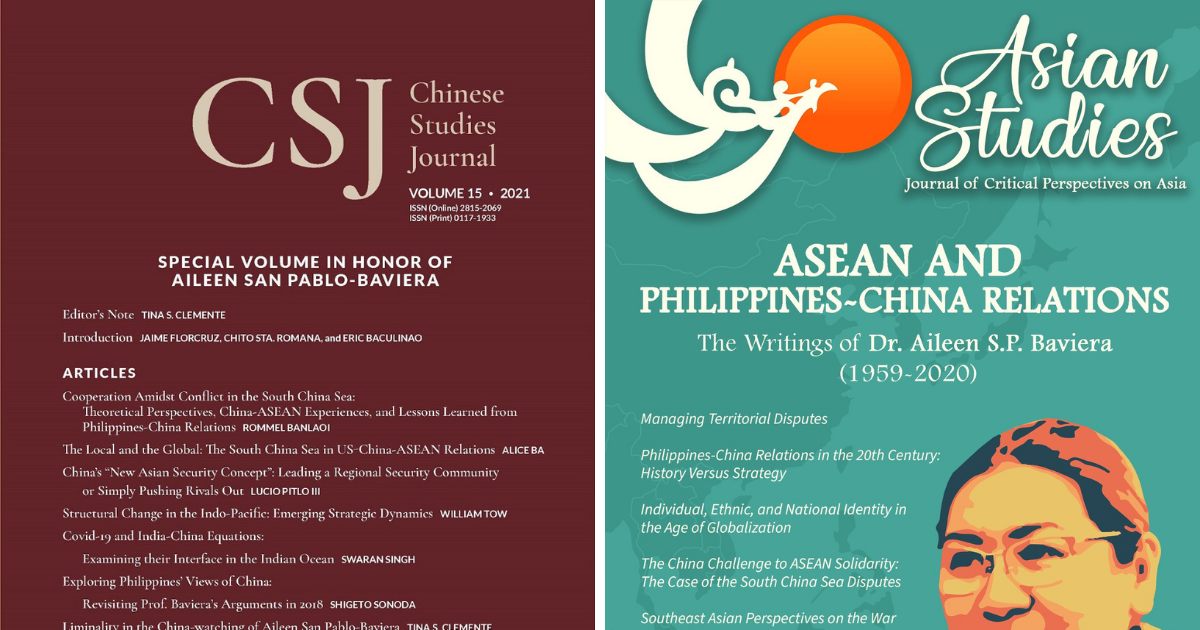 Today marks the second anniversary of Dr. Aileen Baviera’s passing, and in the ensuing time, two journals have published their respective issues celebrating her life and scholarship.

Last April 2021, Asian Studies: Journal of Critical Perspectives on Asia republished four articles by Dr. Baviera—Professor at the UP Asian Center— that had appeared in the journal, as well as a book chapter co-written with Dr. Caroline Hau, who is Professor at the Center for Southeast Asian Studies, Kyoto University.

All these pieces came out between 1997 and 2003, a period representing one of the matrixes—the post-Cold War geopolitics—that informed her work. Although many of them are now dated, they do represent the spirit of the times in which they were written, and serve as signposts that can help determine whether and to what extent, say, ASEAN-China relations or the South China Sea territorial disputes have developed since the 1990s.

♦ Managing Territorial Disputes (1997)
♦ Philippines-China Relations in the 20th Century: History Versus Strategy (2000)
♦ Individual, Ethnic and National Identity in the Age of Globalization: The Case of the Ethnic Chinese in Southeast Asia (2001)
♦ The China Challenge to ASEAN Solidarity: The Case of the South China Sea Disputes (2002)
♦ Southeast Asian Perspectives on the War Against Terror (2003)

Published as Volume 57, Issue 1, Year 2021 of Asian Studies, the issue comes with an introduction by Mr. Janus Nolasco, managing editor of the journal. He assessed all five articles in light of post-Cold War domestic and global contexts. The tribute issue also features several short commemorative essays from Dr. Baviera’s friends and colleagues: Ambassador Wilfrido Villacorta, Atty. Jay Batongbacal of the UP College of Law, and Professor Huaigao Qi of Fudan University. Danae Pantano, editorial associate of the journal, did the issue cover and layouting.

Asian Studies has been published since 1963 by the Asian Center, University of the Philippines Diliman, which offers an MA program in Asian Studies with specialization on China, the very same that Dr. Baviera completed in the 1980s. Download all articles and issues and submit your manuscripts via ScholarOne.

The Chinese Studies Journal—published by the Philippine Association for Chinese Studies (PACS)—also launched late last year a commemorative issue for Professor Baviera, who was a founding member, and former president, of PACS.

The issue has a formidable line-up of articles from experts like Alice Ba, William Tow, Swaran Singh, Shigeto Sonoda, Rommel Banlaoi, Lucio Pitlo III, and Tina S. Clemente — all friends and collaborators of Dr. Baviera through the years. Dr. Clemente, Professor at the UP Asian Center and former president of PACS, is the editor-in-chief of CSJ. Amb. Chito Sta. Romana, Jaime FlorCruz, and Eric Baculinao served as the guest editors.

The Chinese Studies Journal issue covers the fields Dr. Baviera herself wrote on: China-ASEAN-Philippine relations, the territorial disputes, Chinese foreign policy, and Filipino perception of China, among many others. The issue also contains short essays from her colleagues recalling fond their fond memories of working with her since the 1980s.

The issue can be downloaded from the PACS website.

ERRATUM: An earlier version indicated that Professor Tina Clemente is the issue editor. This has now been corrected.