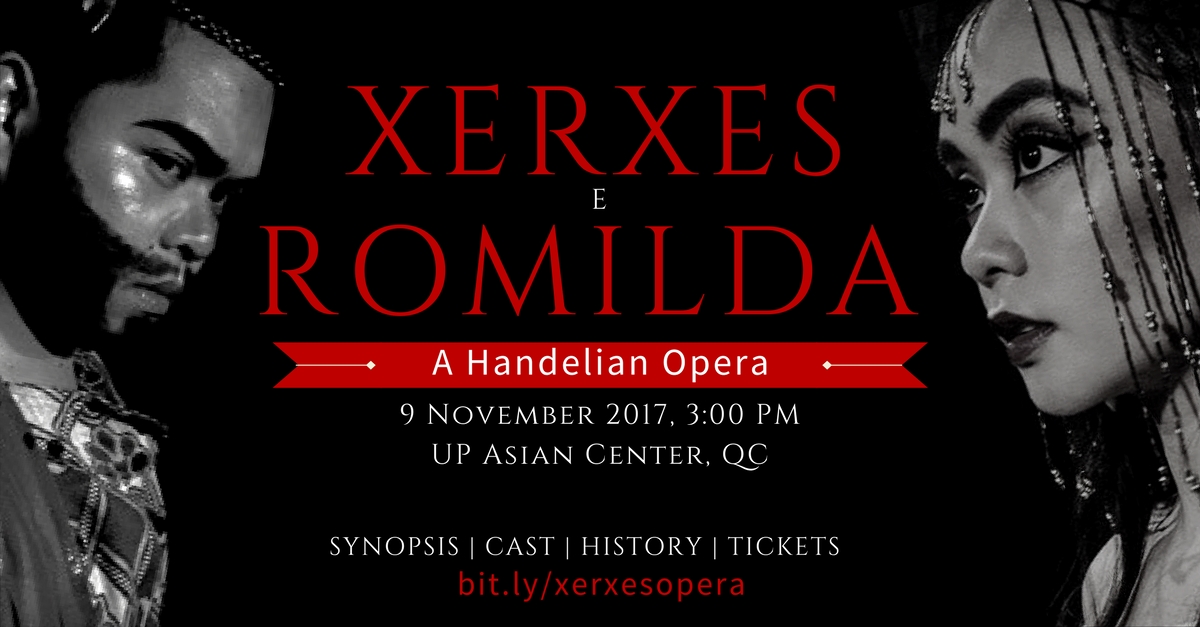 The UP Asian Center, in collaboration with the Department of Voice, Music Theater and Dance of the UP College of Music and Sinag Arts Foundation, will be staging Xerxes e Romilda, a three-act opera based on Georg Friedrich Handel’s Serse on 9 November 2017, 3:00 PM, GT-Toyota Asian Center Auditorium, UP Asian Center, Quezon City.

Set in Persia (modern Iran) in 480 BCE, Xerxes e Romilda is based on Xerxes (Khshayarsha) I of Persia, one of the well-known Achaemenid emperors (shahanshah, king of kings), and grandson of the dynasty’s founder, Cyrus the Great. He ruled from ca. 486–465 BCE and completed the construction of the imperial city of Persepolis (in Southwestern Iran).

The story revolves around Xerxes’ desire to have Romilda for his own, the lover of his brother, Arsamene, and daughter of one of Xerxes’s vassals. Complicating things is Xerxes’s bethrothal to another woman, Amastre, who is hurt by Xerxes’s infidelity and observes events while disguised as a man.

Xerxes e Romilda will be sung in Italian and accompanied by keyboards and a string ensemble. English translations will be provided. This production uses a libretto (the script) by Silvio Stampiglia and is based on Handel’s opera, Serse, which is known for its opening aria, "Ombra Mai Fu", where Xerxes sings to a plane tree. First performed in London in April 1738, it is said to be Handel’s second most-staged opera.

Xerxes e Romilda was staged as Serse a few months ago in Arezzo, Italy at the Arezzo Opera Festival of the Oberlin in Italy summer program. It was performed under the direction of Professor Alegria Ferrer of the College of Music, University of the Philippines, and Oberlin in Italy assistant faculty for summer 2016 and 2017.

Sample the music in this clip (above) featuring Malvin Macasaet (Xerxes) and Kelly Peralejo (Romilda).

While Xerxes e Romilda offers Filipino audiences a chance to experience Italian opera, it also presents an interesting case study of how Europeans perceived the East before the so-called “Clash of Civilizations,” and before the demonization of Iran as part of the Axis of Evil and as the land of the "mad mullah."

Handel’s Serse comes from a long line of European engagement with and representation of Persia, one that includes Herodotus’ Histories and Aeschylus’ play, The Persians, (472 BCE) Montesquieu’s The Persian Letters (1721 CE), and 300, the graphic novel adapted for film in 2006 that portrays Xerxes as a mad king hell-bent on conquest.

Persia (the Hellenized form of Fars, now a province in Iran) has had a largely negative reputation and representation among Europeans. Even so, Richard Stoneman writes in Xerxes: A Persian Life that "Persian themes were prevalent in the drama and opera of the late seventeenth and eighteenth centuries, especially in Italy." Citing Angelo Piemontese, Stoneman notes that there are "some 270 opera libretti on Persian themes, of which 108 originated in Venice, starting in 1640 with a peak in 1691, but fading out after 1736 and the end of the Safavid Empire with its close diplomatic links to Venice. [These links were] buttressed by their shared antipathy to the Ottoman Empire." This interest in Persia in Italy spread to France and England, both of which saw dramas and operas featuring Persian kings, including Handel's opera.

Professor Ferrer has a vast experience as an opera stage director. She is an Aliw Awards Hall of Fame awardee in the Female Classical Category and is included in the Cultural Center of the Philippines (CCP) Encyclopedia of the Arts. She has been nominated for Best Stage Director (Musical) for the Aliw Awards 2017.

The opera is presented by the Department of Voice, Theater and Dance, UP College of Music; UP Asian Center; UP Office for Initiatives in Culture and the Arts; Sinag Arts Foundation, Inc; and UP Office of the Vice-Chancellor for Academic Affairs.

Tickets cost PhP 600, with 50 percent discount for students and 25 percent off for senior citizens and persons with disabilities. Please present a valid ID to avail of the discounts. Tickets are available at Room 105, Hall of Wisdom, UP Asian Center. VIEW VICINITY MAP.