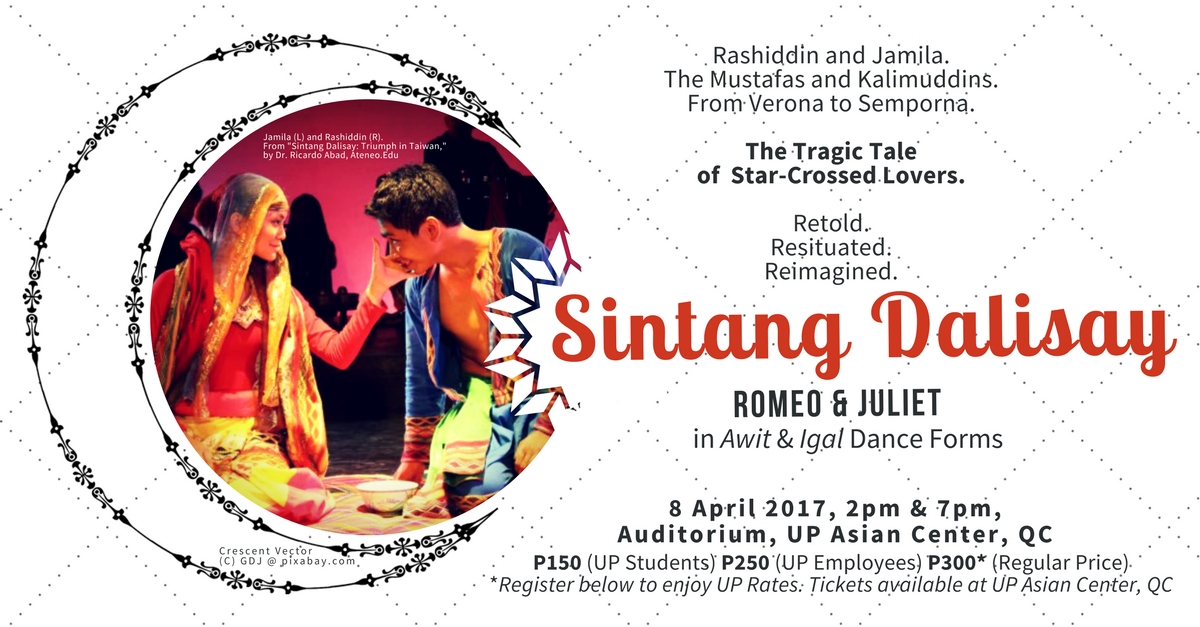 All photos except the middle and lower right are by Trixie Dauz and grabbed from the Sintang Dalisay Facebook page.

‘Sintang Dalisay,’ an adaptation of Romeo and Juliet set in an imaginary Filipino Muslim community, accompanied by kulintangan music, and choreographed with igal dance, will be performed on Saturday, 8 April 2017 at the GT-Toyota Asian Center Auditorium, UP Asian Center, Diliman, Quezon City. Two performances are scheduled, one at 2:00 p.m. and another at 7:00 p.m.

The adaptation is set in an imaginary Muslim community in the Philippines, with the Mustaphas and the Kalimuddins as two prominent families mired in an age-old hatred for each other. Caught in this family strife are Rashiddin and Jamila, two lovers who get themselves secretly married but are forced to separate from each other after Rashiddin, in self-defense, slays a member of the Kalimuddin clan. A demand for justice, Rashiddin’s exile to Dapitan, a clandestine tryst between the two lovers, a missing letter and a scheme involving poisonous potions that goes awry culminate in the death of the lovers and the reconciliation of the two families smothered in grief and regret.

Sintang Dalisay is told using dance, song, drama and live music.  All dialogue is in Filipino; the dance is drawn from the igal, a dance tradition of the Sama in South Ubian and Sitangkai, Tawi-Tawi, and taught to the cast by indigenous artists from these places. The music draws from several Philippine indigenous musical traditions yet anchored in the kulintangan rhythms of the Sulu archipelago.

Tickets may be bought Mondays to Fridays, 8:00 am to 5:00 pm, at Room 105, Hall of Wisdom, GT-Toyota Asian Cultural Center, Asian Center, University of the Philippines Diliman.

Please get in touch with or look for Ms. Louise Sanchez at 920.3535 or email This email address is being protected from spambots. You need JavaScript enabled to view it.. VIEW VICINITY MAP and GOOGLE STREET VIEW.

Register and Get Tickets at UP Rates

*Enjoy UP rates by simply registering online. Kindly note the UP rates won’t be granted unless the name(s) are included in the list. UP students and employees need not register, and can just present their valid UP ID upon purchase.

Sintang Dalisay was performed in 2012 at the CCP National Theater Festival and hailed by students and teachers in Zambales, Iloilo, and Bohol. It was a Recipient of ALIW Awards for best Non-Musical Production and Best Direction (2012) and brought home seven gold and silver medals from the 3rd International Experimental Theater Festival, Vietnam in November 2016.

The performance is directed by Dr. Ricardo Abad and choreographed by Dr. Matthew Santamaria, who is also associate director. A member of the Asian Shakespeare Association, Dr. Santamaria is Professor at the UP Asian Center and is an expert on the igal, having published numerous peer-reviewed articles on the topic.

Sintang Dalisay on April 8 is organized by the UP Asian Center; Tanghalang Ateneo; Ateneo Fine Arts; and the Bunga Arts Link with assistance from the UP Office of Initiatives for Culture and the Arts.

The Asian Center offers M.A. degrees in Asian Studies with four fields of specialization: Northeast Asia, Southeast Asia, South Asia, and West Asia. The Center also has an M.A. program in Philippine Studies that allows students to major in Philippine society and culture, Philippine foreign relations, or Philippine development studies. The Center offers a Ph.D. program in Philippine Studies in conjunction with the College of Arts and Letters and the College of Social Sciences and Philosophy. For an overview of these graduate programs, click here. The Asian Center also publishes Asian Studies: Journal of Critical Perspectives on Asia, the latest issue of which can be downloaded at the journal's website. View recent and upcoming Lectures & Conferences and read other News & Announcements. Join our mailing list to receive invitations to lectures, conferences, etc.